The Internet of Things (IoT) market is large and expanding rapidly. The IoT market reached $761.4 billion in 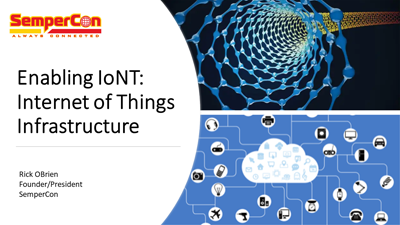 2020 and is expected to reach $1.39 trillion by 2026, according to Mordor Intelligence. The market is being driven by the millions of new sensors and devices getting connected to the internet in the medical, consumer, manufacturing, transportation, and utility markets. The next generation of sensors will be enabled by new nanotechnologies that will reduce size and power of devices and sensors from ‘milli’ and ‘micro’ to ‘nanos’.

Recently the University of Pennsylvania, Singh Center for Nanotechnology invited SemperCon to speak at their Nano-IoT Research Community Symposium. The Nanotech symposium wanted to give it’s attendees an idea of the current Internet of Things infrastructure and a better understanding of current IoT implementations that were starting to utilize new nanotech sensors. SemperCon President Rick O’Brien presented “Enabling IoNT: Internet of Things Infrastructure” which explained what technology forces were driving the IoT market today including: low power semiconductor solutions, improved wireless connectivity options and simplified cloud solutions.  In addition, Rick went over a number of interesting new Internet of Things projects that SemperCon has implemented that took advantage of these new technologies.

SemperCon was invited to speak at the University of Pennsylvania, Singh Center for Nanotechnology at their Nano-IoT Research Community Symposium.